New Skate Park Design in the WorksBuilt in 1989, the East Side Recreation (Rec) skatepark is the oldest municipal skatepark in New York State. In conjunction with Jah Skate Shop, which was located at 8 Caroline Street from 1988 until 1993, the skatepark used to host many team demos, spawned a few professional skaters, and in the mid-90's was an official stop for Vans Warped Tour skate contest qualifications. The skatepark is a highly respected piece of East Coast skate history, and its popularity has grown along with the popularity of skateboarding and other wheeled sports.As its use grows, the skatepark is due for a contemporary upgrade, and plans are in place for a modern, poured-in-place concrete park to replace the metal ramps that have been there for 20 years. The City of Saratoga Springs has proudly partnered with Pillar Skateparks to design the new park, in conjunction with feedback from the local skate community. Construction needs for the park are in the range of $260,000-$300,000, and donations are being accepted through ON DECK Saratoga, who holds the funds on a tax-exempt basis. Please consider donating to this much needed and widely supported upgrade at the link below.www.ondecksaratoga.orgWe look forward to making the new Saratoga Skatepark a reality! 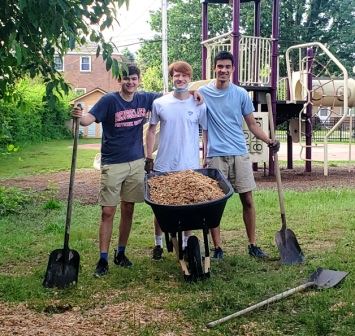 Seniors from Saratoga Springs High School spent the morning of June 9th sprucing up the playground area at the Recreation Center as part of the school's Senior Give Back Day.

9
1
1
2
The Recreation Department offers the opportunity for community organizations to achieve their mission and serve our residents.

To learn how you can become involved as a community partner with the Recreation Department please call 518-587-3550 x2300 or
email recreservations@saratoga-springs.org