As Finance Commissioner, Madigan is charged with taking input from each department and creating a balanced annual budget, one that has sufficient estimated revenues to meet all expenses.  Madigan states: “The lightning strike at City Hall on August 17th resulted in a 2019 City Budget process unlike any I've experienced before. Thankfully, by working together with City elected officials and personnel our operations were restored in a timely manner, allowing me to bring forward a proposed 2019 City Budget driven by my continued commitment to a stable tax rate in the face of the rising costs of good government and the New York State property tax cap.”

The City’s proposed general operating budget will be $47.1 million under Madigan’s plan, an increase of roughly 2.1%, or $960,000, over the 2018 budget.  Contractual wages and new hires to address the demands of the City account for the bulk of the year-over-year change, with Personnel up 4.4% in total in 2019.  Additionally, Equipment is up 10.4%, as the City looks to replace aging or damaged assets across departments.  These increases are partially offset by Benefits savings associated with a change in the City's healthcare plan pricing structure.

The main revenue sources supporting the operating budget remain largely the same as 2018, though sales tax and hotel occupancy tax are budgeted 4.3% and 0.7% higher, respectively, based on solid 2018 performance. Additionally, revenue associated with NYRA admissions is up 22.4%, as the City benefits from strong gate figures at the Saratoga Race Course.

The 2019 Budget counts both reserve funds and fund balance among its revenue resources.  Madigan states, “These funds have been built with taxpayer dollars; using them to maintain a stable property tax rate is the best way to utilize these funds.   Essentially we are giving these dollars directly back to the taxpayer in order to maintain taxes and services.” Amounts supporting the general operating budget include funds from unassigned fund balance ($1.7M), the Retirement Reserve ($300,000) and the Reserve for Bonded Indebtedness ($400,000). “While increases in certain revenue lines help to offset the costs associated with our ever-growing City, appropriately employing reserves and fund balance gives the City time and flexibility to adapt as City demands change. Taxpayers deserve the use of these funding sources rather than paying more taxes or receiving diminished services, especially when we expect to maintain adequate reserve balances subsequent to the budget being adopted,” says Commissioner Madigan.

Beyond the location of City Hall operations, the impact of the lightning strike was most evidently felt in the City's Capital Budget, which is $9.3 million, or $7.6 million excluding Water and Sewer which are funded through their own revenues.  $5.3 million of the 2019 Capital Budget is attributable to the reconstruction and restoration of City Hall, which is expected to cost roughly $11.2 million in total.  The remaining 5.9M for the reconstruction of City Hall will come from capital already bonded, City reserves, and insurance proceeds, the latter of which the City expects will cover roughly half of the total project cost. Two of the largest expenses associated with these renovations are the state-mandated costs regarding our city courts, which city voters approved in 2013, and for a new energy compliant heating and cooling system for City Hall.  Madigan noted that there are rebates available from National Grid to help offset these costs on the back-end, and these much-needed improvements will help reduce utility costs in the future.

Commissioner Madigan points out that the City is in excellent financial health under her administration.  The City’s bond rating from Standard & Poor’s is “AA+” with a “stable outlook” and a financial management practice assessment of “good”.  S&P expressed faith in the City’s management, strong budgetary performances, and good financial management policies.  “The City's robust fiscal well-being has allowed easy and affordable access to the capital market. This will be of the utmost importance as we focus on getting City employees and the public back in our historic City Hall.  The proposed reconstruction plan will result in a safer and more efficient building, which will improve the experience for every resident or employee who comes through our door.”

The complete 2019 Budget proposal will be available on the City’s website for the Wednesday night City Council Meeting: www.saratoga-springs.org 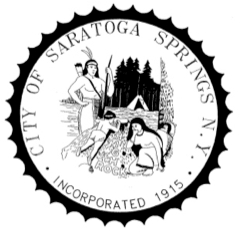