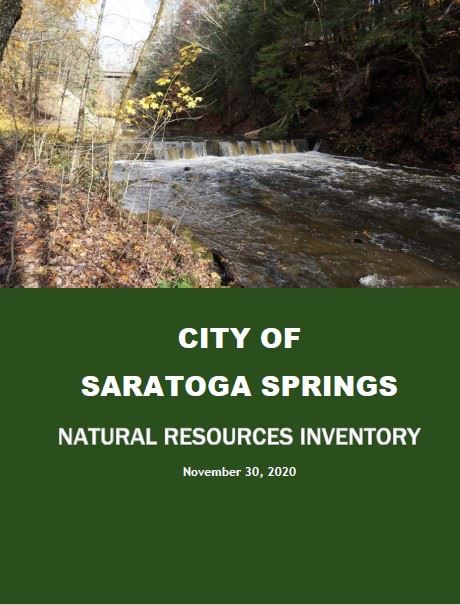 On December 15, 2020, City Council adopted the City’s first Natural Resource Inventory (NRI). The document helps to identify and document key natural resources throughout the city providing guidance for the critical land use planning, development and conservation initiatives that will help the City sustain its most important resources for generations to come. The inventory was developed over two years through a team effort, led by City staff, the Open Space Advisory Committee, and Labella Associates, the City’s professional consultants. Key contributors include local scientists and resource management experts, members of the City’s Open Space Advisory Committee and Climate Smart Task Force, faculty and staff from Skidmore College, graduate students from the University of Albany, and public input at various stages of the process.

To develop the NRI, the City identified key resource targets that define the physical, biological, and scenic features of the City. The NRI consists of 30 primary maps and a substantial narrative documenting the depth and interconnectedness of Saratoga Springs’ expansive store of natural riches. The introduction describes the basic characteristics of the city and is followed by a chapter on Climate Change and its predicted impact on our local resources. The remaining eleven chapters are devoted to individual resource categories: Geology, Topography, Water Resources, Soil, Land Cover and Ecological Communities, Urban and Community Forest, the Greenbelt and Open Space Conservation, Dark Skies, Scenic Resources, Historic Resources, and Areas of Environmental Concern.

The NRI is the first step to determine the baseline for updating the 2002 Open Space Resource Plan as well as the future creation of a Climate Action Plan.

This project was funded in part by Title 15 of the Environmental Protection Fund through the New York State Department of Environmental Conservation’s Climate Smart Communities Program. Matching funds were provided by the City of Saratoga Springs and volunteer time.